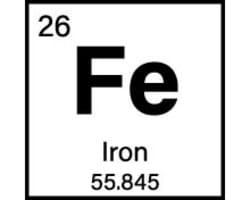 Iron is a relatively abundant metal found in the sun and other stars and in meteorites. It is the fourth most abundant element in the earth's crust by weight.

Pure iron is very reactive and rapidly corrodes. It has four allotropic forms or ferrites; the alpha form is magnetic, but the magnetism disappears in the beta form. Iron is hard, brittle, fairly fusible and used to produce steel and other alloys. Common iron consists of four isotopes, and ten other isotopes are known to exist.

Iron is vital to the functions of plants and animals and carries oxygen in hemoglobin.

Products from some of our suppliers do not display in filtered search results. Please clear all filters to see these products.