Why Does a Wet Dog Smell So Bad? 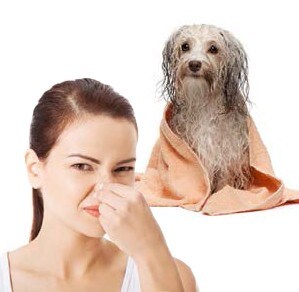 Ask any dog owner their least favorite things about their pooch, and inevitably, the wet-dog smell will be added to the (likely short) list. Most dogs love water and love the car, but the smell that’s left behind on your way home from the lake or beach is rather impossible to forget. So what is it about water that turns a dog’s normal musty smell into an unbearable and unforgettable stench?

The Science Behind the Stink

When you smell, microscopic molecules land on specialized cells— your olfactory sensory neurons. The cells translate the chemical signature of the molecules into an electrical signal that is sent to your brain. From there, the circuits help you label the smell: good, bad or just plain awful.

Canines are rife with microorganisms, and these are the source of most smells your dog leaves behind, mainly from bacteria and yeasts that live in the fur. When these microorganisms, normally unscented, are touched by water, the water breaks down the chemical bonds that hold the pieces together and release those musty molecules into the air. The water then evaporates and raises the humidity surrounding your dog, and since humid and/or warm air can hold more molecules (that compounds the effect on smell) the higher concentration of molecules means of those make their way into your nose to assault those receptor neurons.